Hello everyone, Manny Calavera here. While dealing with the death of the official Vintage Cuties computer, I have been keeping my eyes peeled for public and private auctions. The past months were a dry spell with very few auctions of note. This was welcome to a certain extant because funds have been a bit scant. The hiatus was worth it, though. I managed to get my hands on a special film.

Last week, I was notified about a new auction happening this week and that there was going to be a Becky McFarlane film. There some other films of interest in the auction, but none of them fell under my top ten list of priority models. Becky McFarlane is practically at the top of that list just because of how gorgeous she was and how hard to find her work is.

It was pricey, but I claimed the film outright, ensuring that it will soon become part of the Vintage Cuties collection. From what I understand this film, titled ‘Becky McLain – Sofa” is a larger frame size and more complete version of two films I already added to the collection – Becky McFarlane’s Couch Lounging 1 and 2. Given that this is a 16mm reel, we could have a really nice looking 720p or 1080p quality transfer of this nudie cutie feature! 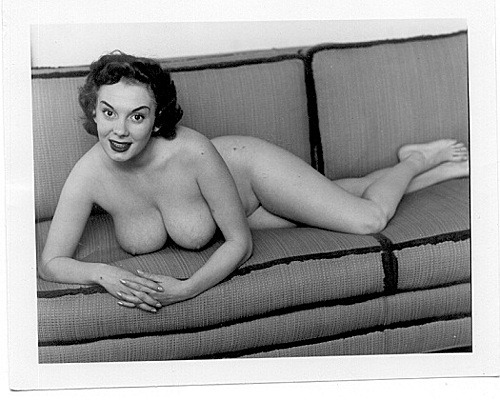 Just looking at the other two versions of this stag film, It’s my personal opinion that this is of the better Becky McFarlane features to exist. Becky is known for being sultry, sensual and genuine in her photo work, but her film work is a different story. Ms. McFarlane’s tone when doing film is either very odd/quirky or very sultry/sexy; there is no real in between with Becky. This feature captures Becky in all her sensual glory.

She plays coy and innocent she tries to untie and molt her blouse, which is the only thing covering her. She strikes poses in front of and on top of a sofa, and the sultriness is of the scale in my opinion. Not only that, but Becky proudly flaunts her pubic zone more so than I’ve seen in any of her other films. Now, I don’t have the film just yet, but it’s on it’s way. Just one more film to put on the ever growing list of films I need to get digitally tranfered. You have no idea how much it is piling up! Here are the rest of the stills from the auction: